The Knights of the Temple

The Chivalric Path and the Inner Jerusalem

The Knights of the Temple and Saint John, taking the forward and spiritual path that we do as outlined in On Chivalry and the Chivalric Virtues, is by necessity situated in the present and it faces the future.

We do not do so at the expense of an awareness or connection to the history of this tradition however, and both the Order itself and its chivalric element, the KTSJ, are informed, enriched and coloured by the stories, lineages and figures that bring it to the current moment.

Some of this is documented history, some of it is undocumented tradition, some of it is myth and legend and some of the works which document these traditions and myths are themselves believed to be forgeries. Whatever your feelings on the mythology, winding history and figures, it is important to understand they they were transformed by their participation in them, leaving a legacy, a tradition and a trust in their wake. 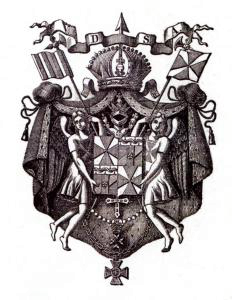 A central touchstone is the Larmenius Charter. The Charter (properly ‘Carta Transmissionis’ or Charter of Transmission) is an account of the survival of the Order of the Temple through a lineage of its Grand Masters, transmitted largely in secret over several centuries.

Widely suspected to be a forgery, the Larmenius Charter has been questioned because the Latin used in writing the charter is largely contemporary with the era in which it was recovered, rather than the medieval latin in use during the time of the demise of the original Order in the 14th century.

Those who support its legitimacy or question the examination, contend that either a) the document had been corrected during transcription, the entries for each Grand Master having been standardized as well or b) that the conclusion was based entirely on one single inaccurate translation, uncritically accepted at the time- and that a later transcription and translation shows it to be 14th Century Latin.

This document ultimately would be recovered from the effects of the reputed last Templar Grand Master prior to the French Revolution- Timoleon de Cossé, Duc de Brissac. It begins:

“I, Brother John Mark Larmenius, of Jerusalem, by the grace of God and the secret decree of the most venerable and holy martyr, the Grand Master of the Soldiery of the temple, to whom be all honor and glory, confirmed by the common council or the Brethren, being endowed with the Supreme Grand Mastership of the whole Order of the Temple, to every one who shall see these Letters Decretal thrice greeting:

Be it known to all, both present and to come, that the failure of my strength, on amount of extreme age, my poverty, and the weight of government being well considered I, the aforesaid humble Master of the Soldiery of the temple, have determined, for the greater glory of God and the protection and safety of the Order, the Brethren, and the statutes, to resign the Grand Mastership into stronger hands.” (Mackey’s History of Freemasonry)

The Charter lists the names of the secret Grand Masters of the Order of the Temple beginning with a Jean-Marc Larmenius of Jerusalem, successor to the martyr Jacques de Molay, and ending in the present-day of the time with Dr. Bernard-Raymond Fabre-Palaprat.

Born in Cordes-sur-Ciel on May 29th, 1773, Dr. Fabre-Palaprat, was a surgeon and Priest who practiced in Paris, France.

A recipient of the Legion of Honour and a member of the Chevaliers de la Croix, Dr. Fabre-Palaprat was elected Grand Master of the restored Ordre du Temple in 1804, succeeding the Regent of the Order, Claude-Mathieu Radix de Chevillon, who himself was appointed by Timoleon de Cossé, Duke of Brissac before his death in the September Massacres during the French Revolution, in 1792.

This election was supported by his consecration as a Johannite Bishop by a Primate of the Order, Arnal, Cure de Pontoise, also known as ‘The Templar’. This consecration is attested to by Dr. Fabre-Palaprat in his own words in a letter to L’Ami de la religion in 1834.

With the recovery of the Carta Transmissionis, his election as Grand Master, and the consecrations, first as Johannite Bishop by the Primate Arnal, and later by Guillaume Mauviel, Constitutional Bishop of Cayes, Haiti- the Order of the Temple and its Grand Master had been fully restored in the modern era.

The last Grand Master of the original Order of the Temple was the Holy Martyr, Jacques de Molay.

The Carta Transmissionis describes how he transmitted his authority and title of Grand Master before his death to a Jean-Marc Larmenius of Jerusalem, who at one point served as Seneschal of the Order and Preceptor of Cyprus.

Larmenius perpetuated the tradition and transmitted both lineage and authority to Thomas Theobald of Alexandria. This would continue on until the era of Napoleon through a succession of Grand Masters (as above), until it would come to be vested in the French doctor and priest, Fabre-Palaprat, who would see them restored to prominence and practice.

Upwards of a decade after his election and consecration, and accounts differ between 1812 and 1814- Dr. Fabre-Palaprat would restore the Johannite Church, widely called Eglise Johannites des Chretiens Primitifs, the Johannite Church of Primitive Christians but referred to in its own documentation as the Eglise du Christ, the Church of Christ.

Following quickly on its heels in 1814, he would also present to the Church and Order, a work called the Levitikon, a collection of documents which included both the Gospels according to the Primitive Church and commentary on the practice, theology and legend of the Johannite Church. Portions of the Levitikon were said to originate in 1154 from the monk, Nicephorus of Athens, and were themselves in part an exact copy of a 5th century manuscript.

Documents and accounts within the Levitikon go further than the Carta Transmissionis (which is itself included in the work) and would expand upon the accounting found in the Carta, outlining that the lineage of the Johannite Church had its ultimate origination in the Mysteries of Egypt, a claim common also to Freemasonry in that era.

These teachings and lineage would then be transmitted successively to and through the Temple of Jerusalem, the Community of the Beloved Discipline lead by John the Apostle, and through to the Order of the Temple by the Johannite Patriarch Theoclete of Asia Minor, who would vest his authority and spiritual transmission as Sovereign Pontiff and Patriarch of the Johannite Church in the first Grand Master of the Temple, Hugues de Payens and thus through and to Jacques de Molay and onward up to the Sovereign Pontiff and Patriarch, Bernard-Raymond Fabre-Palaprat in the Modern Era.

Authority and Lineage in the Present Day

The Order of the Temple and Saint John was canonically established by the Sovereign Pontiff and Patriarch Iohannes IV of the Apostolic Johannite Church in accordance with Canon Law and the customs of the Church. As a Religious Order of the Apostolic Johannite Church, the Order, both the Oblates and the Knights of the Temple, derive their primary authority and lineage from that of Church itself.

The Apostolic Johannite Church, and thus the Order of the Temple and Saint John, steward several lineages of a distinctly Johannite character, including that of the Eglise Johannites des Chrétiens Primitifs from Dr. Bernard-Raymond Fabre-Palaprat as well as non-Palaprat Johannite lineages among others, and we recount and give due in our Sacred Liturgy and in the practice of the Divine Office, to what we call the Institutional Narrative and the Litany of the Sovereign Pontiffs, a form of the legend and lineage presented within the Levitikon.

It is not our intent to claim the historicity of these legends nor do we claim any exclusive possession of the lineages we transmit. Our intent is to maintain them with honour and through exploration, supporting the narrative which at once speaks to both the diverse and the perennial natures of the human spiritual journey and to the modern history of the tradition in which we work and pray.

The Novitiate of the Knights of the Temple is open to all baptized, confirmed or received members of the Apostolic Johannite Church regardless of gender.

A postulancy of one year of active membership and the recommendation of a priest of the Apostolic Johannite Church is required to embark upon the process for being received as a Novice.

Postulancy commences when an individual submits their declaration of intent to the local Superior for the Knights of the Temple.

Upon entering the Novitiate, novices take religious vows for one year as a part of the discernment process.

Knights of the Temple are expected to serve and assist with minor parish duties at a local Johannite Parish if one is nearby.

Should it be determined that the Novice is spiritually mature, stable and committed to their own path and public service, and with the concurrence of their local priest and the appropriate Superior, they will be admitted to Religious Profession and receive the Accolade.

Those Novices who are eligible for Solemn Vows are required to submit a national-level criminal background check prior to being allowed to take Solemn Profession and reception as a Knight of the Temple.